Diagnosing Candida is not a simple matter. It’s a controversial illness, and many medical professionals have not yet recognized it. Regretfully, this means that many patients are turned away and do not get the help that they need. Don’t be surprised if the physician may conclude that patient is a hypochondriac and/or neurotic and may suggest tranquilizers, anti-depressants and/or psychiatric help.

The problem with Candida is that many of the symptoms of a Candida overgrowth are quite general and can be attributed to a number of other illnesses. The reason is that the symptoms are often exactly the same, and Candida may manifest itself in any combination of those symptoms. Some of the possible misdiagnoses for Candida, together with the symptom that your doctor has focused on:

Depression/mental disorder – neurological effects on the brain from fungitoxins

A Candida misdiagnosis can actually encourage Candida to grow further. If your doctor believes that you have IBS, Crohn's Disease or Gastroenteritis, he may prescribe the anti-inflammatory Cortisone or some other medicine. This introduces steroids and other chemicals to the gut, which will increase the growth of Candida colonies.

Another problem with diagnosing is that if Candida levels are actually assessed via the blood or stool, it is impossible to know how tolerant one is to Candida and its by-products. A person with a strong constitution may be capable of hosting large populations of Candida fungus with minimal symptoms, while another person may suffer greatly from a mild overgrowth of Candida.

Testmethods in the field are not the best and the disease is generally not an area that has been much focus on, either in terms of treatment or diagnosis. The most commonly used test methods are blood samples for culture and scrape test on skin (if the fungus is found here), but these will often be negative despite the presence of the fungus. Removing tissue (biopsies) for cultivation is reliable, but often inappropriate in severely weakened patients and requires anaesthesia, which Candidapatients will react negative to. CT scan of lung infections may help giving a diagnosis. Usually, the diagnosis is made by a physician solely on a suspected systemic fungal infection and unfortunately only very few doctors able to do so. Therefore it’s important to remember that your doctor is relying on you for an accurate description of your symptoms, so make sure you tell him everything. If it’s not possible to find a qualified doctor who can diagnose the disease, try to find a local naturopath who can diagnose you. There are some very specific symptoms for systemic Candida infections (see specific symptoms). You can use these for self-diagnosis if you can’t get help you need. You get a sure indicator of a systemic Candida infection, if you for a period of 2 weeks quit your regular diet and lifestyle, and instead try the Candidadiet and lifestyle. The sharp drop in your sugar intake will trigger a rapid Die-Off effect and you have no doubt when it happens and you feel the fungus beginning to withdraw from places around the body. But it can be a rather tough transition for many normal eating persons, with such a radical and sudden change in diet. If you cheat just once by eating FORBIDDEN foods this test will have little effect and be useless. 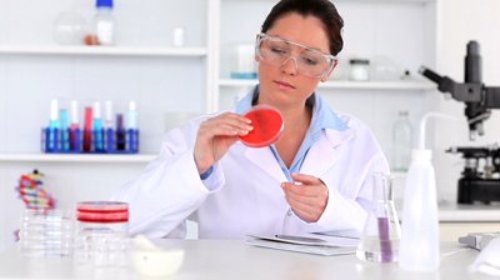 Lab Tests: Candidafungi occur naturally in the gastrointestinal tract. Therefore, if it can be found at other parts of the body, than the gastrointestinal tract, it may be an important indicator of a systemic fungal infection. Especially if you visually can see the rootforming fungus on the skinsurface, it will be a sure indicator. Here are some scientific ways to test for systemic Candida infections:

Scratch Test on the skin if it occurs here: Taking a scratch test on Candida infected skin (or grafting in the mouth) and grow it in a fungiculture or analyze it under a microscope. Can be used to identify local skinfungi infections, which may be an indicator of a systemic fungal infection. The test will often give a negative result even though the fungi can be seen. One reason is that the skincells scraped off in the area with rashes, will often be off dead, loose skin without any fungiactivity. The test can not be used to identify Candidaroots in the skin. Systemic rootforming Candida, which can be seen in the skin, has a different DNA structure and a different way to grow, than local skinfungi and will often give a negative result when tested.

Detection of Candida antigens in the blood: An anti-Candida antibodies test or Candida Immune Complexes test. There are 3 antibodies that should be tested to measure your immune system's response to Candida - IgG, IgA, and IgM. High levels of these antibodies can indicate that an overgrowth of Candida is present. By some doctors, antibody detection is considered to be useful, by others its seen as meaningless because of its unreliability.

A general problem with the different blood analyzes is that if for instance, the Candida infection has come under control through a Candidadiet and lifestyle, where its apperance in the body has been diminished and hence also its presence in the blood, it will often give negative testresults. Although the disease is not widespread, you can easily still have debilitating symptoms, it depends on the individual's sensitivity to Candida and its byproducts.

Detection of Candida in tissue (biopsi): Removing Candidainfected tissue (biopsi) for cultivation and afterwards examine it in a microscope or doing as with the blood, a Candida culture of the tissue sample. Pretty sure test, but often inappropriate in severely weakened patients and requires anaesthesia, which Candidapatients will react negative to.

Detection of Candida in a stool sample: Often the Candidafungi will not losen from the intestinal wall and thus do not end in the stool, when doing a stool test. The test may therefore be unreliable. In addition, only very few labs do the test.

Detection of Candida in the saliva - selftestning: A tongue coated with white mucus can very well be a indication of Candida. In the morning, Candidapatients often have an almost snow-white thin little slimy coating on the tongue. A simple saliva test in the morning brings the first certainty. You fill a glass with tap water and add a portion of the first morning saliva into the glass. The saliva should float to the surface. After a few minutes to 1 hour, under the floating saliva, individual threads will be formed. The test is positive. Now try adding a sugar cube to the water or an equivalent amount of loose sugar, then you will see tremendous growth. That’s  also the way the fungus works in the gut, when it gets sugar, just with the result that those tentacles go in and make holes in your gut. The test is not scientific reliable and severel sources of error may play a role. 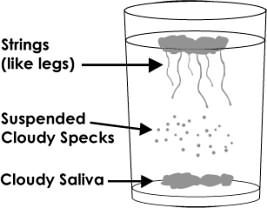